By Michelle WarnekeJanuary 23, 2019No Comments

With a difficult fourth quarter making for an emotional roller-coaster, we want to offer a more objective take on the selloff. From our perspective, three important “permanent” themes (as opposed to “transitionary”) stand out in understanding the marketplace and investing. The first, which is mostly about macro and top-down influence, is the economy and the economic cycle. The other two, more about micro and bottom-up, are earnings and valuation.

In round numbers for investors, the last ten years have been about a growing economy, growing earnings, and rising valuations. In 2018, the economy expanded and earnings grew impressively, but valuations contracted. It was this valuation contraction that made for the market decline. During the fourth quarter, earnings estimates were essentially unchanged, but the price-to-earnings ratio (PE) for the S&P 500 Index declined by about 14%. This analysis is barely mentioned in the news cycle narrative, yet we see it as the right starting point in understanding what occurred and what is likely ahead of us.

What was the fourth quarter selloff about?

Table 1 shows the unchanged earnings expectations and the valuation decline of approximately 14%. We note that
although 18.5 is the multiple for the S&P 500 Index as a whole, there is more to the valuation story. Calculating the market-cap weighted PE multiple of the Index, it was 27.6 times 2018 earnings estimates on September 30th and 21.1 times on December 31st (a decline of 23.6%). Twenty-seven times earnings represents a very expensive market. The fact that we saw a valuation correction that took us down from very expensive is neither surprising nor necessarily damning for future results.

The valuation problem was made much more complex by a small group of very expensive stocks that had a disproportionate impact on Index results. At the end of the third quarter this small cohort of glamour stocks represented only 8% of the Index’s market cap yet was responsible for 30% of the year-to-date return. However, in the fourth quarter valuation correction these high-flyers were down nearly twice as much as the rest of the market. We avoided allocating to the “bubble under construction,” which is why average valuations in our portfolios have been much lower than market averages. This contributed to our portfolios’ resilience in the fourth quarter. That said, we derive little satisfaction from relative results when absolute results are negative. The selloff may have hit the most expensive stocks hardest, but few were spared amidst a widespread decline.

What about the threat of a growing trade war, the Fed hiking interest rates, or mid-term elections? Each had an
impact on sentiment, which certainly influences valuation. We see these as largely secondary factors within the broader context of historical evidence: expensive markets regress to valuation means.

Referring to Table 2, using the past 20 years as a guide, there is a very meaningful correlation between rising earnings, an expanding economy, and positive results in the market. As mentioned, the valuation problem in 2018 got in the way of this pattern. We expect both rising earnings and an expanding economy in 2019. Now that valuations have moved from expensive to unremarkable, the valuation impediment should be resolved.

The big top-down question: will the economy continue to expand, or will it slow into contraction? The data we analyze continues to be stable and positive. Without any pretense of economic forecasting, the next recession would seem to be further out than 2019. 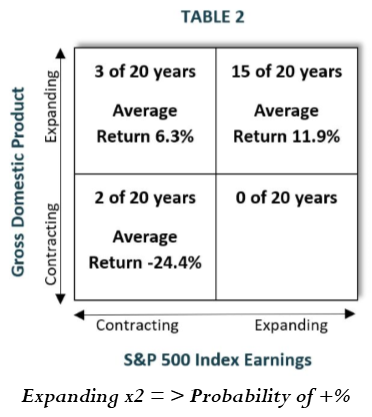 What is our strategy going forward?

Be Rational Investors. Focus on data and fundamentals over sentiment and tactical momentum. Be your own greatest ally by not making behavioral finance errors.

Top-down. Our Strategy for the Cycle considers the correlation between the economic cycle and the marketplace. Focus on offense during the expansion (do not tactically trade in and out of the market) and be willing to become more defensive when the data turns.

Bottom-up. Our Quality at a Reasonable Price investment discipline focuses on companies’ fundamental business advantages. In addition, late in this economic cycle we have shifted emphasis toward less economically sensitive sectors.

Utilize Plan-Based Investing. Success is individual and driven by long-term results. We want to ensure your asset
allocation is, first and foremost, aligned with your needs and objectives.

We look forward to both a productive year ahead and adding value with risk management over the economic cycle.